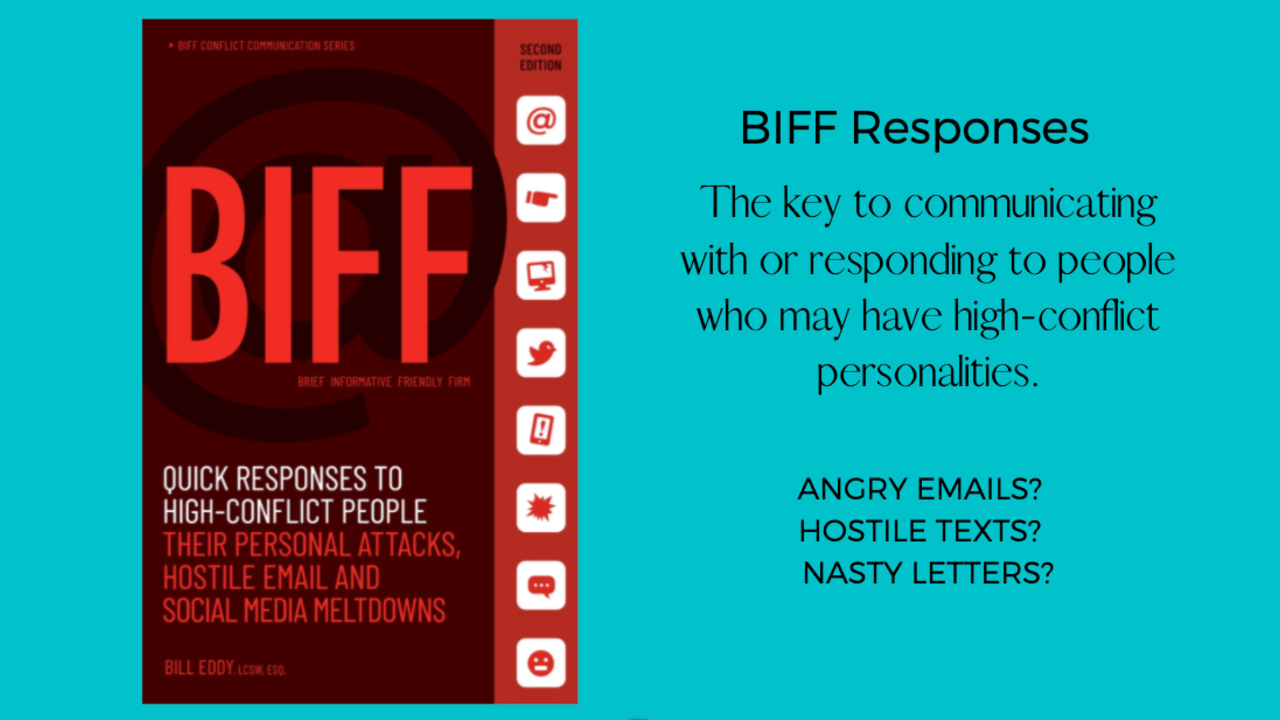 Is everything a battle with your ex-partner, spouse, or your child’s other parent? Are there ways you can better manage a high conflict divorce or custody conflict? Mediator and attorney Stephen McDonough shows us how:

As a Massachusetts divorce and family law lawyer and mediator, I am in the conflict management business. When a client is dealing with an unreasonable or difficult ex, stress frustration levels skyrocket, so anything I can do to provide my clients tools to better manage different situations is a good thing. The highest levels of conflict normally flow from parenting and custody disputes. Frankly, some of the conflict is over relatively mundane things, but that doesn’t make it any easier for a parent dealing with a difficult personality on the other side.

I recently finished an interesting book with an even more interesting title – BIFF®, by Bill Eddy. Eddy is a lawyer, mediator, and therapist, and an expert in dealing with High Conflict People (HCP). So what – or who – is BIFF?

I will now list all people with high conflict tendencies that I know:

Just kidding. You know who you are…BUT wait! According to the author, you don’t actually know who you are; meaning people with high conflict tendencies are seriously lacking in the self-awareness department…but more on that later. But wait again…Could I be a person with high conflict tendencies and not even know it? Nah. I’m awesome and everything really is all your fault.

People with high conflict tendencies frequently exhibit patterns of the following behaviors according to Eddy:

Now, I will finally tell you what BIFF® is. BIFF® is short for a BIFF Response® usually made in writing, but it could be in person, to a person with high conflict tendencies. BIFF® stands for:

Eddy provides numerous examples on responding to the difficult people in our lives – whether at home, work, an ex-spouse, through social media, etc. The examples are realistic, and it was easy to see how a BIFF Response could help manage a person with high conflict tendencies.

I am going to keep a supply of these books around for clients that could benefit from learning the simple art of the BIFF response®. For about $12.00, you can get your own copy on Amazon.com.* This could be the best $12.00 you ever spend on yourself. If you are getting a divorce or experiencing issues with your ex-spouse, then this book may help lower your stress levels and avoid the blamespeak (as Eddy refers to it) of people with high conflict tendencies. I give it two thumbs up, probably three thumbs up if I had a third thumb.

Stephen McDonoughis a Massachusetts divorce and family attorney and mediator. He is the owner of Next Phase Legal LLC located in Medfield.

This article is re-blogged with permission of the author. View the original here.

*You can also get your copy of BIFF: Quick Responses to High Conflict People, Their Personal Attacks, Hostile Emails and Social Media Meltdowns directly from the BIFF Response Website. The BIFF Response method is also available in an online training video.