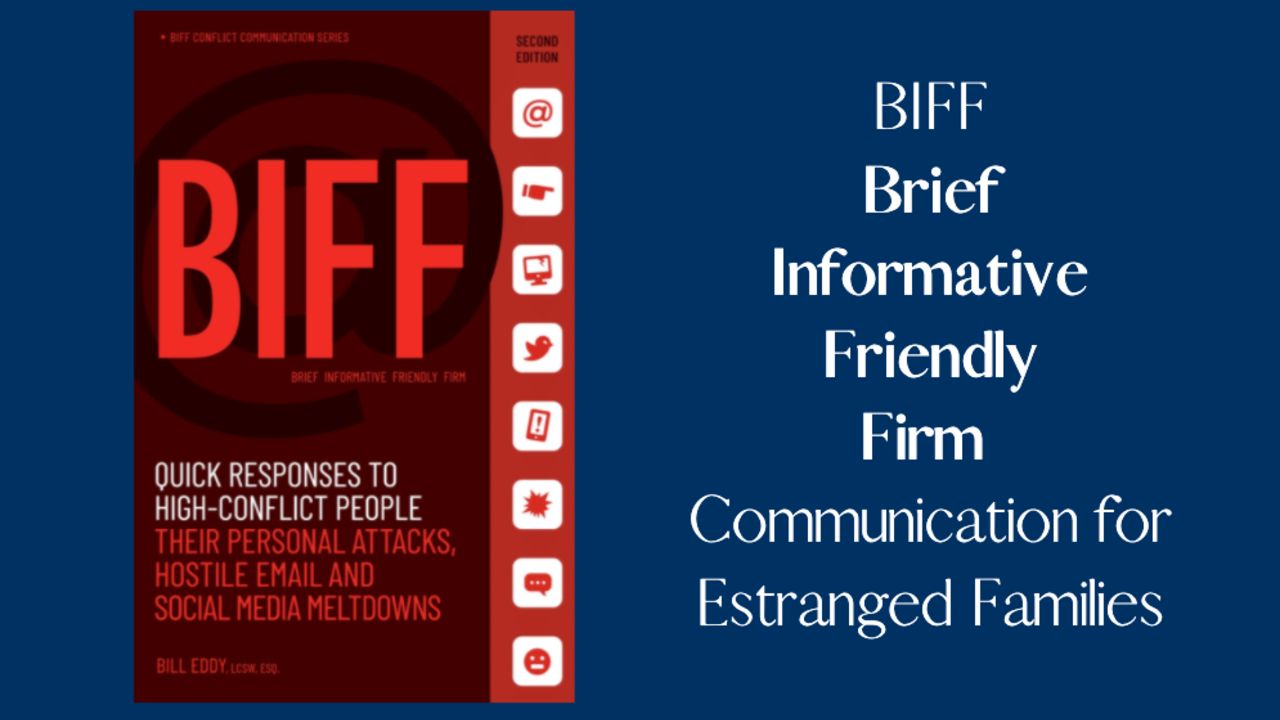 This time of year we think about and visit with our families. Hopefully happy times. But for many people, it is a sad time because of estranged family relationships. Maybe there’s an adult relative who has cut off all contact with another adult relative because of their difficult personality. Or maybe it’s a child who has become alienated and rejected one of his or her parents in the middle of a high-conflict separation or divorce. Maybe it’s because of politics. Is there anything that can be done to help reconcile these relationships during the holidays?

For the past dozen years, our BIFF® method of communicating has helped many people in family conflicts calm things down while getting important information across. We believe that it can soothe some wounds and sometimes help bring people back together who have become estranged.

The method is simple. Just keep the communication:

BRIEF: Usually 2-4 sentences is sufficient, so there’s nothing to trigger further conflict.

FRIENDLY: Have a friendly tone, so that it calms a conflict rather than generating more.

In one situation I know about, three adult daughters confronted their mother at a family gathering with the news that they figured out that her problematic behavior throughout her life was because she had a personality disorder and that she could get help with it. Mom promptly kicked them out of her house and said she never wanted to see them again. Dad reluctantly supported Mom in this. They were distraught, as their intent was to help her.

The solution they figured out was to never mention personality disorder again. Instead, they waited a couple months, then sent her occasional holiday cards that simply included brief cheerful greetings, comments about the weather, and hopes to see them at a future holiday. Essentially, BIFF® communications. Over time, Mom and Dad softened up and let them back into their lives, but without further discussion of this difficult topic.

Many parents (and grandparents and other relatives) who have become rejected by a child in a high-conflict divorce will not see the child at all over the holidays. Perhaps the child told them to never contact them again and they may have agreed or wonder what they should do. In general, parents are encouraged to send holiday greetings and other occasional cards to the child. Generally, they should be BIFF® communications. A tip that the parent learned recently that might be helpful to the child.

For example with a teenager: “I learned this week that multi-tasking isn’t really possible. I saw a video that explained that we have to start and stop concentrating on each task, so what we call multi-tasking is really switching back and forth, which can be exhausting. I thought you’d be interested to know this as you get older and do more and more things in your life. Love, [Mom or Dad]”

The idea is that it is helpful information that the child can use of the type that they need to learn from both of their parents. It carries no baggage, as it doesn’t refer at all to the past, to conflicts, to the other parent, etc. Just straight information.

And in the worst case scenario if the child doesn’t open his/her mail, or tears it up, or the other parent discards it so the child never knows it came, the parent who sent this can still someday tell their child that they kept trying to communicate. Many adult children who were alienated eventually contact their rejected parent and wonder why they didn’t try to communicate. This solves this problem.

This is a relatively new area of intense emotional conflict in families these days. The same BIFF® approach can be used, before or after a tense interaction. For example, you could write in advance: “I know that we have different opinions on certain issues in the news these days. I’m happy to avoid discussing them and focus on enjoying our time together this holiday. I hope you will agree.”

And if there has been a blowup of some sort, it doesn’t hurt to reach out in a BIFF® communication: “I know we had a heated discussion last week. I just want you to know that I value our relationship and look forward to seeing you again in the coming year. There’s so much that we share that I would love to talk about next time.”

BIFF® communications are easy, feel good and often calm a conflict. These are just a few suggestions for any situation, and especially for those who have become estranged and want to re-connect. We wish you well for the holidays and look forward to our own communications with you next year.

Bill Eddy is a lawyer, therapist, and mediator. He is the co-founder and Training Director of the High Conflict Institute, a training and consultation firm that trains professionals to deal with high-conflict people and situations. He is the author of several books and methods for handling high conflict personalities and high conflict disputes with the most difficult people.